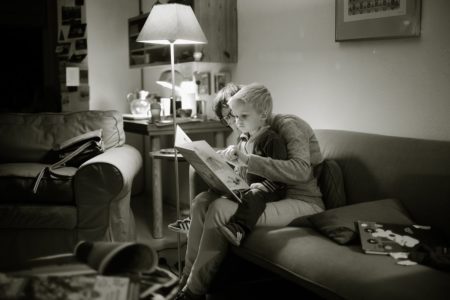 1. Stimulates brain development
Before your child learns to speak, he will first learn to understand speech, and so create a so-called passive dictionary. This phenomenon is related to the sequence of maturation of individual centers in the brain responsible for understanding and articulating speech. Writing speech from early childhood is therefore associated with a better acquisition of knowledge about language. The more you come into contact with a given phenomenon, the more connections between neurons, thanks to which the child understands more and the better he cope with information in the future. There is only one trap – stimulation also does not serve him, so nothing at all.

2. It awakens the curiosity of the world
The child is fascinated by the literary world and receives it almost uncritically. One can often observe that a child recreates the behavior of his favorite characters who serve as an example. It is important, therefore, that the patterns we present with children’s literature are simply wise. Though sometimes it’s enough to be funny!

3. Stimulates speech development and improves memory
Reading to children stimulates the passive (understanding) and active (speech) dictionary of the child and helps to overcome dyslexia. It also helps in expressing your own thoughts. By listening, the child follows the development of actions, dialogues, notices and predicts the consequences as well as causal relationships.

4. Shapes emotional intelligence
Books are a treasury of knowledge about emotions for the child. Each hero, after all, manifests itself, and usually in one novel there is a whole bunch of them. Thanks to these stories, he not only learns feelings, but also learns to name them and learns how to express them.

5. Builds emotional bond
Reading together is a way of spending time with your child. Daily reading before bedtime can be a respite not only for a toddler, but also a parent. An evening reset and a moment where we can be here and now – together.

6. Develops the imagination
Literature compels us to think, analyze, and thus develop our imagination. It is a counterweight to television production, where everything is given vaguely “on the plate”: verbal and visual communication, therefore the role of the passive recipient remains. In the case of books, it is completely different.

7. Improves memory
Reading to children stimulates not only the imagination, but allows you to combine new knowledge with what the child already knows. Such reading right before sleep strengthens the “muscles of memory” – with each new information the brain creates new synapses and improves the action of the existing ones. Thanks to this, people who read (of different ages) have a chance to retain a better memory than those who lie in the chairs in front of the television series.

8. Encourages participation in social life
A study by an American agency supporting the NEA art has shown that people who read regularly (or who have been in contact with childhood literature) are much more culturally and citizenically involved. They also have greater ease and freedom of expression, they do it in a more eloquent way. After the vocabulary of a few-year-old, you can learn if the parents are reading the book to the child.

9. Prepares for independent reading and writing
A child who comes into contact with literature from an early age, knows the letters much earlier and what lies behind them. It’s a great introduction to learning.

10. Builds the reader in the future
Those children who have been dealing with literature from the earliest years have a much greater chance of continuing their literary fascinations in adulthood. So when we read to children today, we are actually building a society reading tomorrow. It sounds good, right?