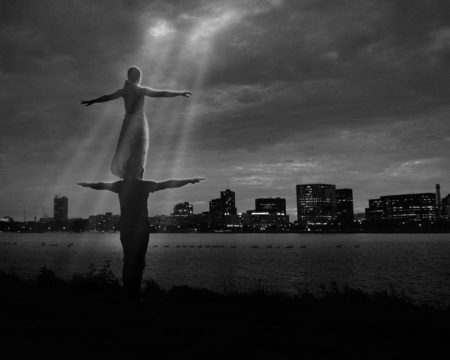 Acroyoga is a combination of classic exercises used in yoga with acrobatics and some elements of Thai massage. The result is an exercise system that surprises with its lightness, beauty and originality. Behind Acroyoga, however, there is hard work and a lot of muscle strength.

Exercises are performed in pairs. One person is the base, i.e. he is carrying his partner. The other person, the so-called flyer, performs yogic positions using the body of the base. Both people need to cooperate well and communicate well to make everything work.

In the early stages of learning Acroyoga, there is also a figure of a spotter, or a belayer, who is tasked with securing the flyer against possible fall. Everyone has the opportunity to be a base, flyer or spottler in class.

Acroyoga is based on asanas, or positions characteristic of the classic hatha yoga, adapted to the needs of performing them in the air, in the acrobatic version. Extending the body is very useful here, but it does not mean that people who are not very flexible can not take advantage of such activities – they will simply perform easier, less demanding versions of exercises.

Classes begin with a warm-up – preparing the body for intense exercise and performing difficult positions – and end with relaxation, during which the body calms down and calms down.

Acroyoga – effects of exercises
Acroyoga is characterized by its spectacular nature. The admission positions during this type of exercise are unprecedented.

Behind this amazing exercise there is also a whole lot of positive aspects for the body, including:

In addition, Acroyoga has a psychological aspect. Mutual trust between the partners is needed, because each minimal base movement is felt by the flyer, which can fall, and vice versa – any minimal change in the tension of bodies by the flyer can result in the balance being out of balance. Exercisers are working on increasing their attention, concentration and courage. They overcome the fear of accepting acrobatic positions on the body of another human being.

Acroyoga is also great fun and, despite heavy physical effort, a lot of relaxation, especially for the head. How can you think about your problems by fighting to keep your partner’s feet? 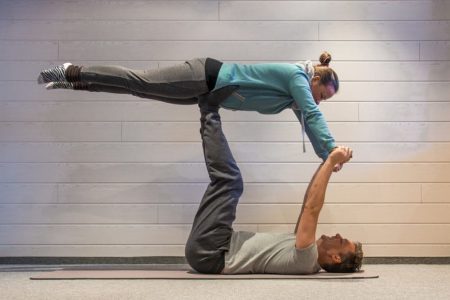 Acrobatics in the air – for whom?
Definitely classes of this type are for people who are looking for challenges or other, less common, but also original, forms of movement. Fascinates of yoga, gymnastics, acrobatic exercises, pole dancing will definitely find their way to Acroyoga. The classes can also be used by people who do not have experience in practicing classic yoga.

Acroyoga is not a workout aimed at people who have back problems. Discopathy, sciatica, problems with intervertebral discs definitely disqualify to participate in classes.

Not aloved Acroyoga for people with: low pressure, dizziness (due to the many positions in which the head hangs down), as well as problems with balance or fear of heights.