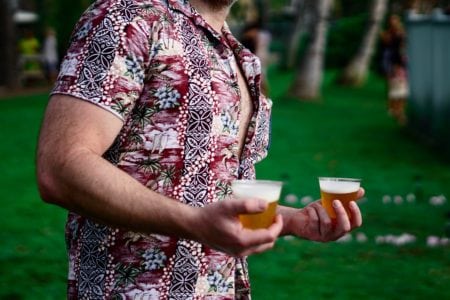 Many people believe that a small amount of alcohol can not damage the body. Products of the film industry, video clips of video clips and numerous advertisements created a dominant that drinking is an integral part of a beautiful successful life. Therefore, a bottle of beer in the company of friends or an alcoholic cocktail in the club is considered the norm. And right after training – a pleasant way to relieve tension.

However, both doctors and professional trainers are sure that alcohol is incompatible with sports. And even a small amount of alcohol can be consumed only 6 hours before and 6 hours after exercise. The fact that the body’s absorption of alcohol and its withdrawal is relatively long.

The effects of alcohol on people involved in sports

1. Deceleration of muscle growth. Because of the use of alcoholic drinks, the liver function changes and the production of amino acids involved in protein synthesis for the growth of muscle tissue decreases. In addition, suppression of growth hormone and insulin-like growth factor occurs, which slows down the process of muscle building.

2. Dehydration. The cleavage of ethanol is always accompanied by a pronounced diuretic effect. Because of this, the distribution of fluid in the body is disturbed, which leads to dehydration. In this state, it is dangerous to exercise, because the blood becomes thicker, which means that the work of the heart becomes more complicated. It is not recommended to play sports in dehydration because of a violation of heat regulation, since it is impossible to achieve a result with a lowered temperature of the body.

Due to a significant diuretic effect, the body loses a number of necessary vitamins: A, C and the whole group B, as well as calcium and zinc.

3. Formation of fats. After productive training, the body replenishes the energy and nutrient reserve, using accumulations. Thus, we get rid of the excess fat layer, and the muscles are renewed and restored. However, if within 10 hours after the session use alcohol, the whole process will be broken. Alcohol slows down metabolism, which seriously affects weight loss. Ethanol itself is a high-calorie product, because one gram contains 7 calories. Do not forget that all alcoholic beverages greatly increase appetite and at the same time dull the sense of satiety.

4. Decreased endurance and reaction speed. Due to the slowdown in the synthesis of glycogen, which acts as a kind of reserve fuel for the body, a person can not achieve the state of the limit, after which new personal victories and records are achieved. Because of the reduced reaction speed, you can bring your team during a game of volleyball, hockey, handball. And such sports as shooting, mountaineering or aeronautics, are simply dangerous for people who have consumed alcoholic beverages.

Because of the effects of alcohol, the duration and sequence of sleep phases are disturbed. The body does not get the rest necessary for further training.
In professional sports the use of alcoholic beverages before the competition can entail the disqualification of the participant. Under the ban, even medicinal tinctures and chocolate sweets with liqueur or cognac filling, with which you can really calm down a little and reduce hand tremors. Small doses of alcohol are considered doping in such sports categories:

In those cases where it is impossible to avoid drinking, drink them in such a way that harm to the body is minimal. To do this, purchase only high-quality certified alcoholic beverages. Two hours before the celebration, take the sorbents, and before the feast eat a sandwich with butter. Snack foods rich in protein, and after the event, consume plenty of pure still water.

People who want to make sport a part of their lives should understand that it is impossible to combine training with alcohol. And the best rest for muscles is not a glass of frothy beer, but a massage or a warm bath. After all, the result can only be achieved if you overcome yourself, and not only in the physical, but also in the moral sense.